Iris Gray is a Vancouver Island-based Self-Advocate who was short-listed for the 2020 Autism Awards. She is a passionate advocate for mental health and inclusivity within the autism and LGBTQ communities. Iris regularly hosts meetup groups that foster acceptance in her hometown of Victoria, BC. This AutismBC Connects is all about Mental Health and Pride within the Autism community

I am bisexual and autistic, diagnosed in 2005. I have been diagnosed with Depression (specifically Dysthymia) and Generalized Anxiety Disorder. Dysthymia means that I am at a low level of depression most of the time, with occasional major depressive episodes. Anxiety leads to my not reaching out to people who might actually want to be friends with me because I am afraid to contact them. I am afraid of rejection. I have rejection-sensitive dysphoria and will interpret almost anything as a sign of rejection. Depression will lead me to not make an effort at work and just do the bare minimum because I just don’t have the mental or physical energy to put in an effort.

I attended a psychiatric group outpatient program almost 30 years ago, but I found that it didn’t work for me. It was heavily based on social skills and how you acted around other people. I benefited more from individual sessions with my counsellors. I believe some of my anxiety is a result of being rejected by my peers as a child and teen when people would pretend to like me and then reject me. Anxiety and depression also run in my family. I saw a psychologist for ten sessions under Mental Health, but that person didn’t believe that women could be autistic and didn’t understand my struggles making friends and building relationships and blamed all my problems on my parents. 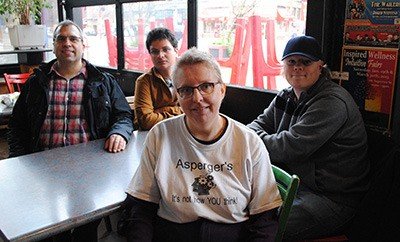 Iris with her Asperger’s Meet-up group on Vancouver Island

It’s hard to separate autism from my mental health struggles because all of them are wound up together. I do think autism plays a role in that being autistic has often led to my being rejected socially, or for jobs I wanted, and made it hard to make friends, which leads to worsening depression. My sensory differences make anxiety worse because I hear every little noise in my house, which leads to anxiety when I wonder if someone is trying to break-in, or I wonder if something is broken in my house. Not sure which is worse! Having things trigger sensory issues like loud noise or some form of physical discomfort puts me out of sorts which can cause me to act cranky or irritated.

I want people to understand that mental illness can be separate from autism some of the time or be linked to it in other times. A person might have mental health issues because of problems that are linked to autism, such as trouble making friends, trauma from being rejected by peers, difficulty with social interaction, or being repeatedly fired from or turned down for jobs. On the other hand, sometimes mental illness is completely biological and unrelated to autism. Most often, it’s a mixture of both.

Sometimes things get blamed on mental health that are caused by autism, and some things that are blamed on autism are caused by mental health. A person might be afraid to leave the house because of anxiety, but because that person has autism, people think that his problem is caused by autism. A child might seem to have anxiety because they react badly to loud noises, but it might be a sensory issue that causes them to react badly to loud noises. 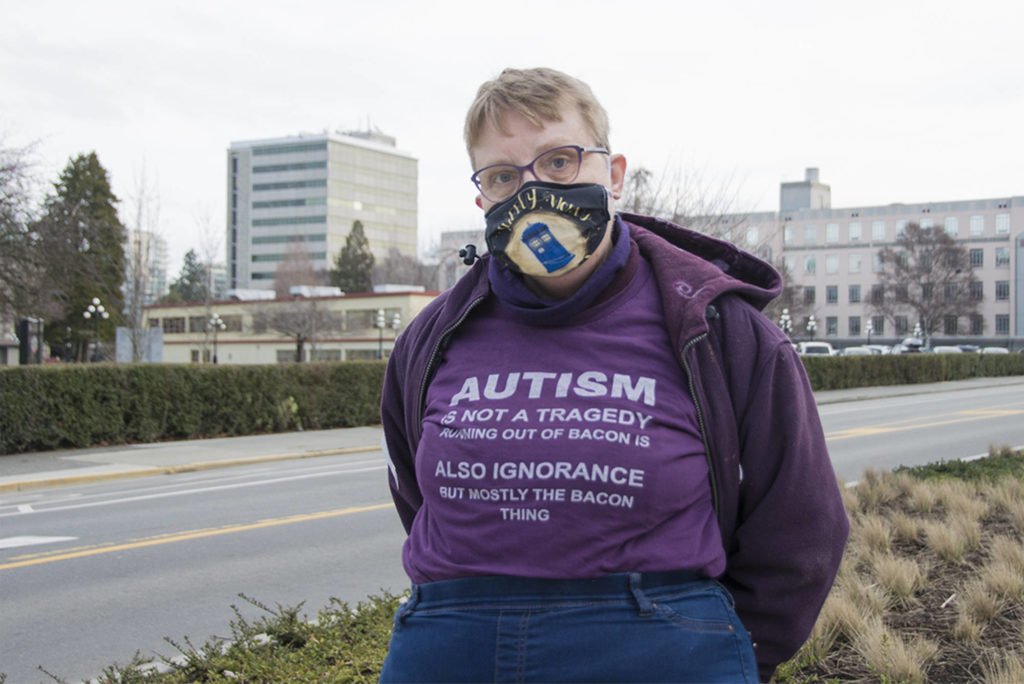 Advice for Family and Friends

Find an autism-friendly therapist. I don’t know if there is such a thing as an autistic therapist, but if there is, that would be an ideal place to start. Get a proper diagnosis of mental health issues. Autistic people are often depressed because of trouble making friends, feeling rejected, or because of feeling isolated. The pandemic doesn’t help with that. Try to help your autistic loved one find autistic peers who might help them feel less isolated. Let your autistic loved ones indulge their special interests. If it is possible to have a pet, animals are great for both autism and mental health. Not everyone is able to work, but for those who can work and want to work, having a job to do can really help a person’s self-esteem. 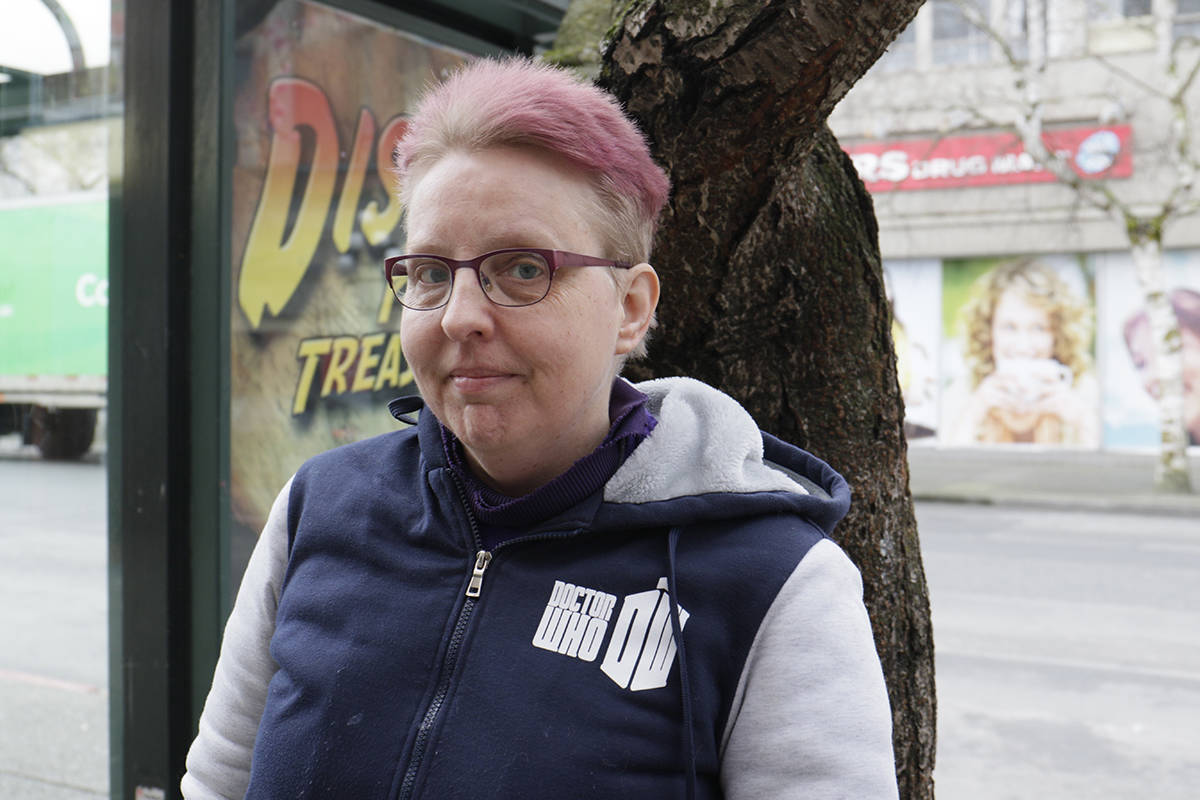 From the time I was a kid, I was attracted to people of all genders. I would have pinups on my wall of men and women. At first, I thought I just admired the women or wanted to be like the women. When I got older I realized I didn’t want to BE the women, I wanted to be WITH the women.

Even though I didn’t know I was autistic at the time, the first woman that I dated could tell that something was “different” about me, and she told me that she didn’t want to date somebody who was disabled. It was the next woman I dated who figured out that I was autistic and who sent me some links to follow to help me learn about autism.

There is a great deal of sexual and gender diversity among autistic people and I have found that most autistic people are accepting of sexual and gender diversity, though it is possible that I have self-selected accepting spaces online. There are trans and non-binary people in the autism groups that I organize, and I won’t allow anyone who is homophobic or transphobic to participate in the groups. I have had a few people tell me that “I don’t think I have anything in common with somebody like that” (meaning someone who is non-binary) but then they come to realize that all of us have autism in common and any discomfort they had goes away.

I have found a lot of acceptance for gender and sexual diversity in the autism community but less acceptance for being autistic in the LGBTQ2S+ community. The history of inaccessibility in the queer community has led a lot of disabled people to not bother even trying to participate even when it actually is accessible. I would rather attend an autism event than a queer event.

“There are trans and non-binary people in the autism groups that I organize, and I won’t allow anyone who is homophobic or transphobic to participate in the groups. I have had a few people tell me that “I don’t think I have anything in common with somebody like that” (meaning someone who is non-binary) but then they come to realize that all of us have autism in common and any discomfort they had goes away.”

There is not a lot about the LGBTQ2S+ community that is autism-friendly. A lot of the events are loud and noisy and have lots of activity. I enjoy Pride more when I have earplugs. There isn’t a lot for disabled people in general, not just autism. Gay bars aren’t comfortable for autistic people at all, and they’re often not wheelchair accessible either. Pride in Victoria is celebrated in July. I usually attend the parade but I don’t always stick around for Pride Fest afterwards because they have a lot of really loud music and that’s something I have a very hard time with. The last Pride I attended before the pandemic had a quiet space set aside for people who have sensory issues. I hope to see more of that in the future.

I would like to see more diversity in Pride month. Most Pride committees and Pride celebrations are dominated by neurotypical able-bodied people, mostly white people and mostly cisgender people. I would love to see more representation of different races, different genders and different abilities. Because I am in a different-sex relationship I don’t have much to do with the LGBTQ2S+ community currently.