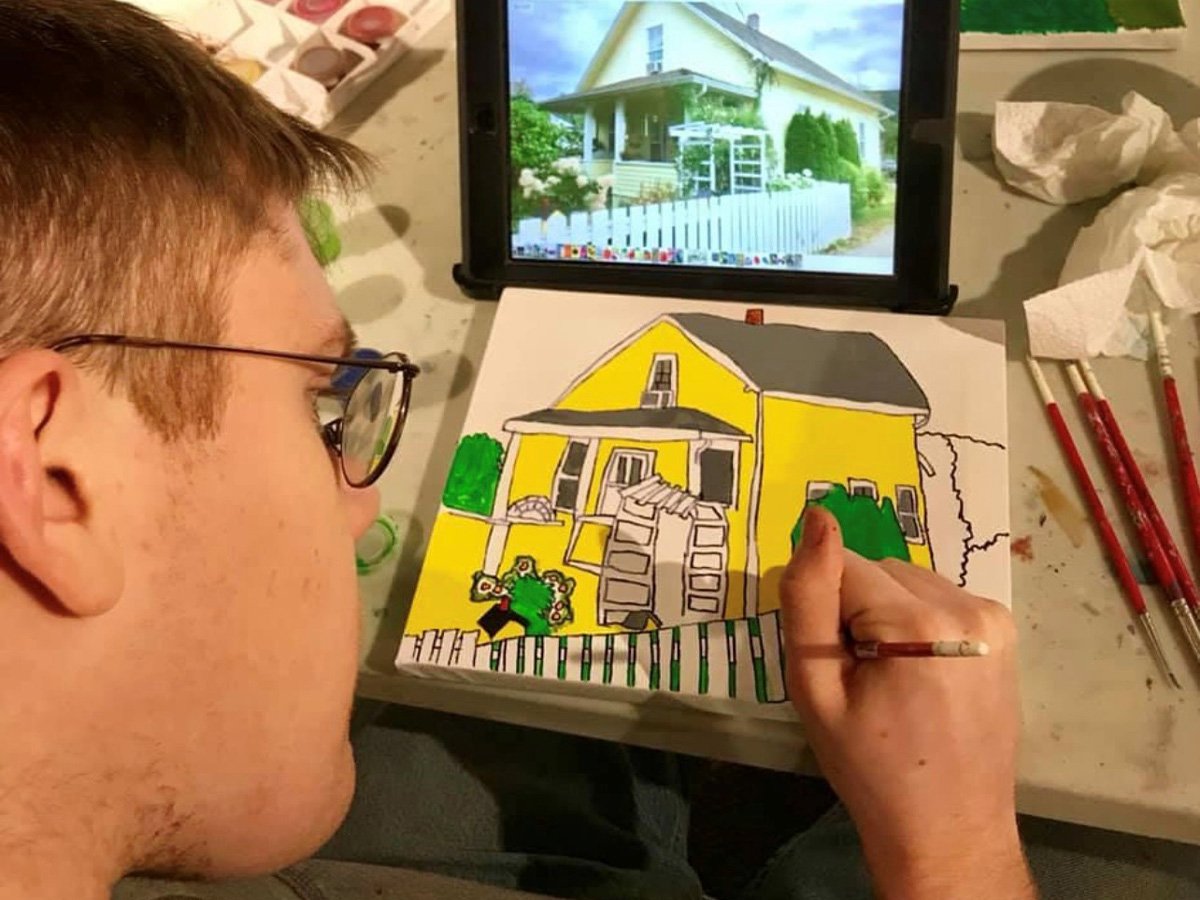 Mitchell Brager is an autistic artist from Terrace, BC. In this article, his mom Colleen shares how his passion and skill for art has led to a career. Check out the bottom of this article for details on where you can view and purchase Mitchell’s work!

My name is Colleen Brager, I am writing this article on behalf of my son Mitchell. I do most of this type of communication for Mitchell as he does not like to answer questions. He prefers to use his talking for making requests. I call myself his ‘Momager’ because I manage his art career.

Mitchell enjoys doing anything and everything and exploring new places. He likes hiking, downhill and cross-country skiing, skating, chopping veggies, baking, and participating in Special Olympics programs like swimming, bowling, curling, basketball, soccer, bocce, and track and field. One of his biggest passions is art. 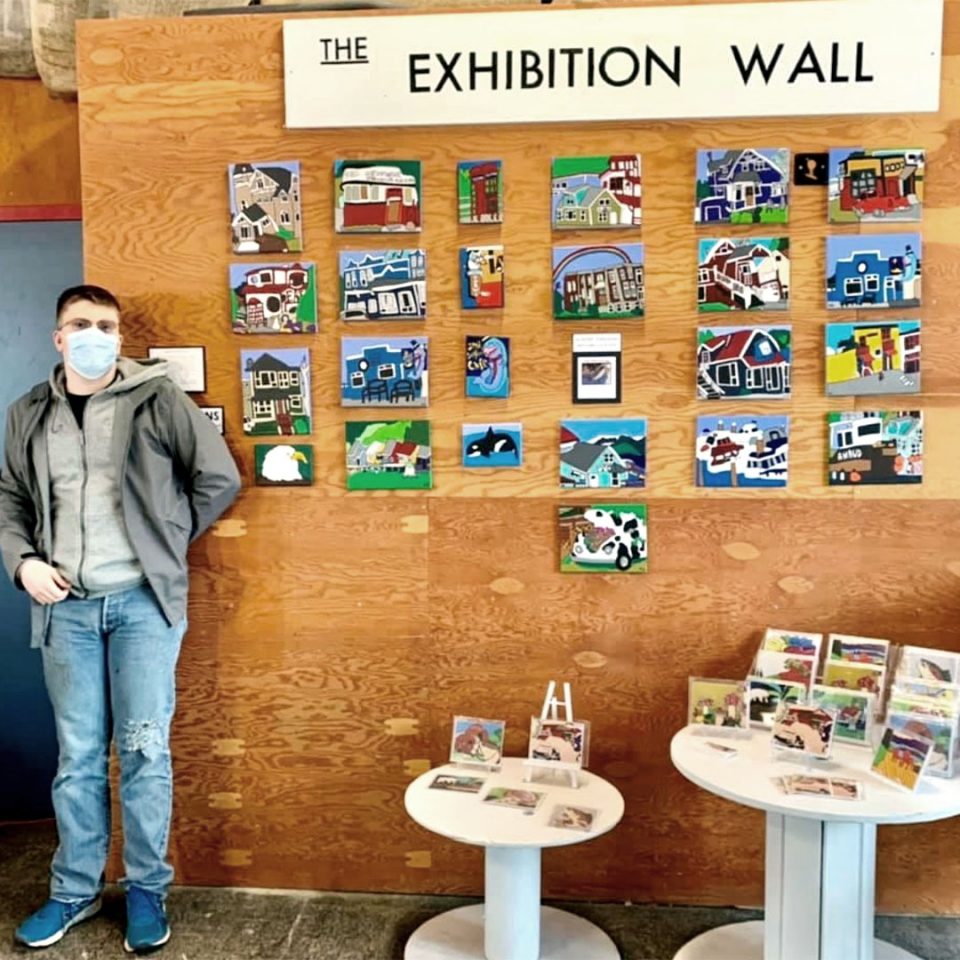 Drawing and painting has always been a very calming outlet for Mitchell. Autism makes it hard for Mitchell to interact with his peers, but his artwork was a way for him to connect with people.

His favourite things to draw are Disney and other cartoon characters, which is what he does all the time when he isn’t painting. His cartoon drawings are his and he doesn’t like to give them up often or very easily. His paintings, on the other hand, he does to sell and to give to people. Early on, I told him that he could make some money to buy treats by doing paintings and that inspired him.

Because he loves buildings, he wants to go into everyone’s home and check it out to see what it looks like inside. Because he can’t do that, he draws them instead. He also likes to go on real estate pages on the internet and do virtual tours of houses. I take pictures of interesting houses and buildings wherever we go and then Mitchell draws them. It was also suggested back in 2018, that Mitchell do some paintings of heritage houses in Terrace and he has been painting them ever since. 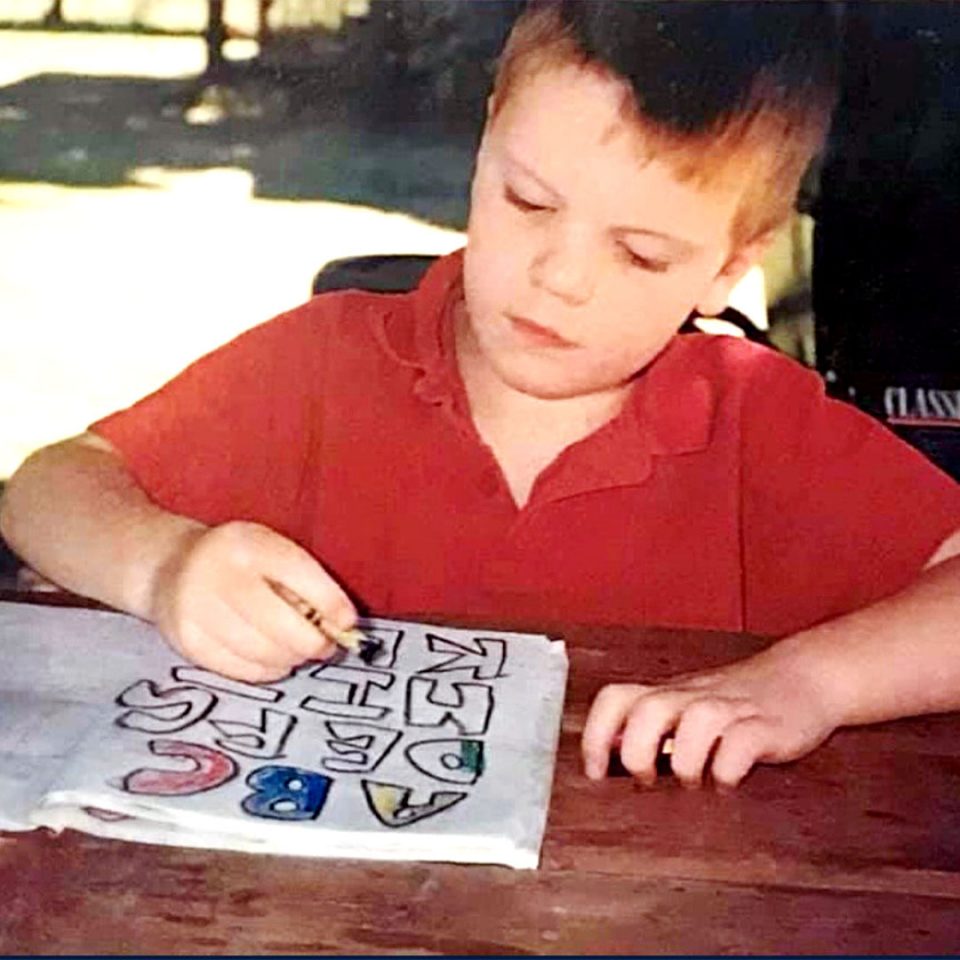 In elementary school, Mitchell liked to draw pictures beside his spelling words. He would print ‘apple’ and then draw an apple. Mitchell’s aide, Ede Axelson, was an artist and she saw his artistic potential and encouraged him. Mitchell enjoyed drawing the characters from the books he read, like the Bernstain Bears, Arthur, and Franklin. His classmates were very impressed with his drawings and this was a way for him to connect with them.

We enrolled Mitchell in some after school art programs and the art teacher asked if she could do private lessons with him. She felt that he would gain more from that as there wouldn’t be so many distractions from the other kids. We also put Mitchell in summer art camps. Any artist that worked with him was always impressed with his ability. Eventually, we were told that he didn’t need anymore lessons because he has his own style and we should just let him do his own thing. 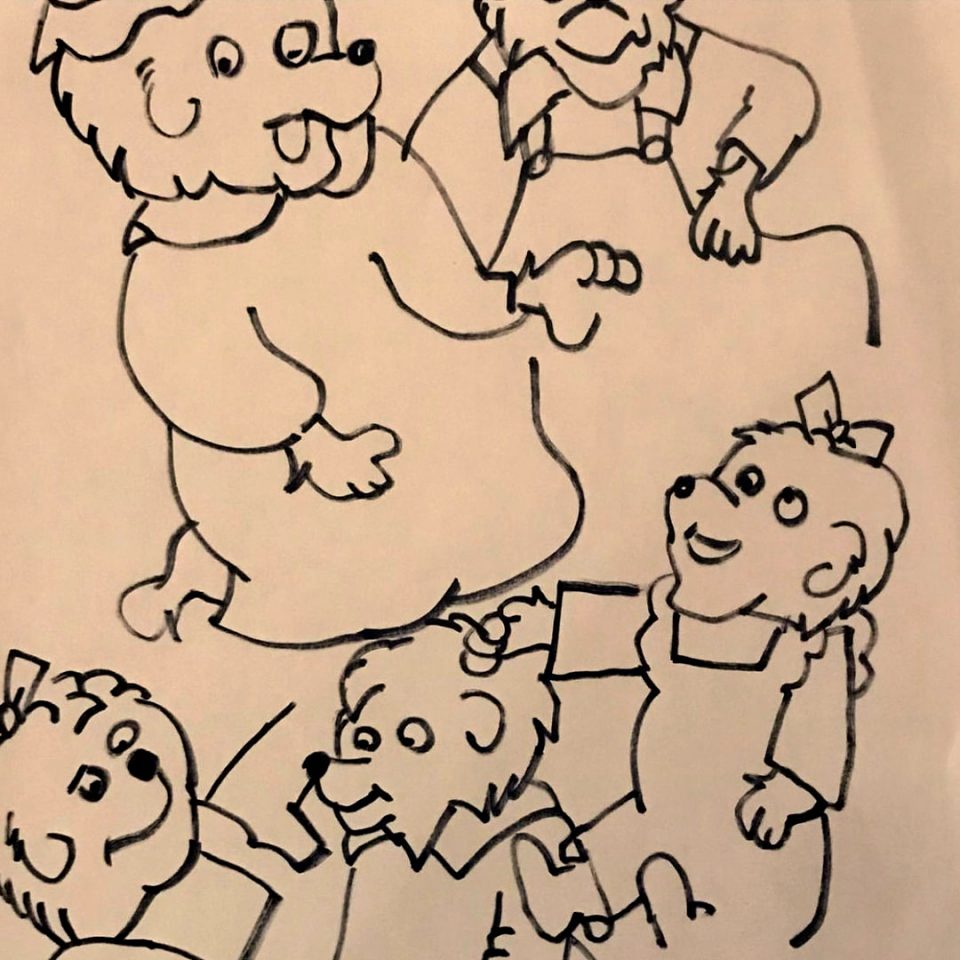 In 2013, when Mitchell was in middle school, he went to a teen program at Cool Arts and this is where he sold his first painting. The Cool Arts Society in Kelowna was created to provide opportunities for adults with developmental disabilities. Mitchell continued to paint at Cool Arts and at home. We started a Facebook page called Art by Mitchell, so we could showcase his paintings and try to sell them. Once he started to sell his paintings and numerous people wanted the same piece, we decided to get some art cards printed, so more people could enjoy his art. Mitchell’s first series of cards were printed in the fall of 2013. 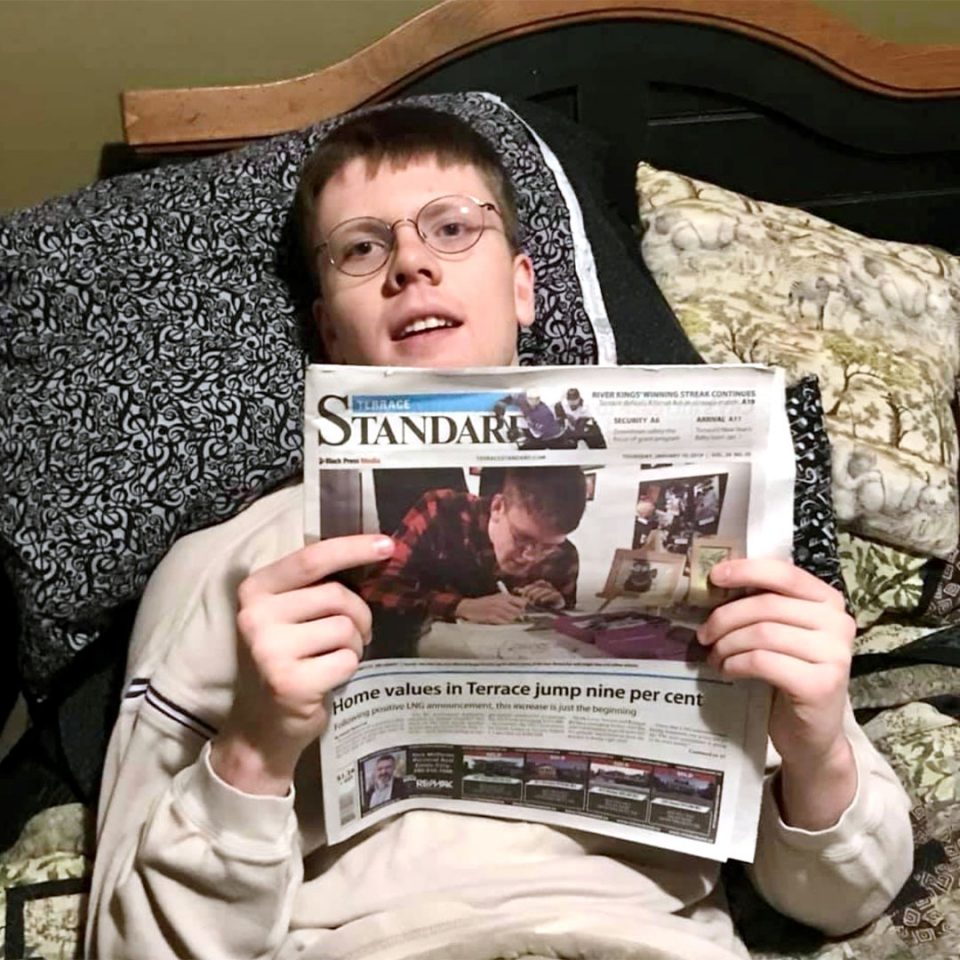 Our family moved to Terrace in 2014 and in the fall of that year Mitchell’s cards and paintings were put in the Terrace Art Gallery’s Gift Shop. Mitchell and I started to volunteer at the gallery and still do. Every month, Mitchell and I go around to deliver exhibition posters. This has been a great way for people in the community to get to know Mitchell.

Mitchell had his first art show in Don Diego’s Restaurant. His paintings hung on the wall for the month of July 2016. He sold quite a few paintings and cards during that show.

In October 2016, Mitchell had a small exhibition at the Terrace Art Gallery called “Literally Mitchell.” We chose this name because he is very literal when he draws and paints, he likes to work from photos and draw exactly what he sees. We went around town with invitations to Mitchell’s show and invited people we had gotten to know to come and see a different side of Mitchell. He is not just that guy who tries to touch everything in your store, he is also a very talented artist. After this show, Mitchell was featured in the Community section of the Terrace Standard newspaper with an article and picture. After this, he started to be recognized around town as Mitchell the Artist. As parents of a young man with autism, it was awesome for Mitchell to be known as an artist instead of ‘the strange guy looking in shop windows and touching everything.’ 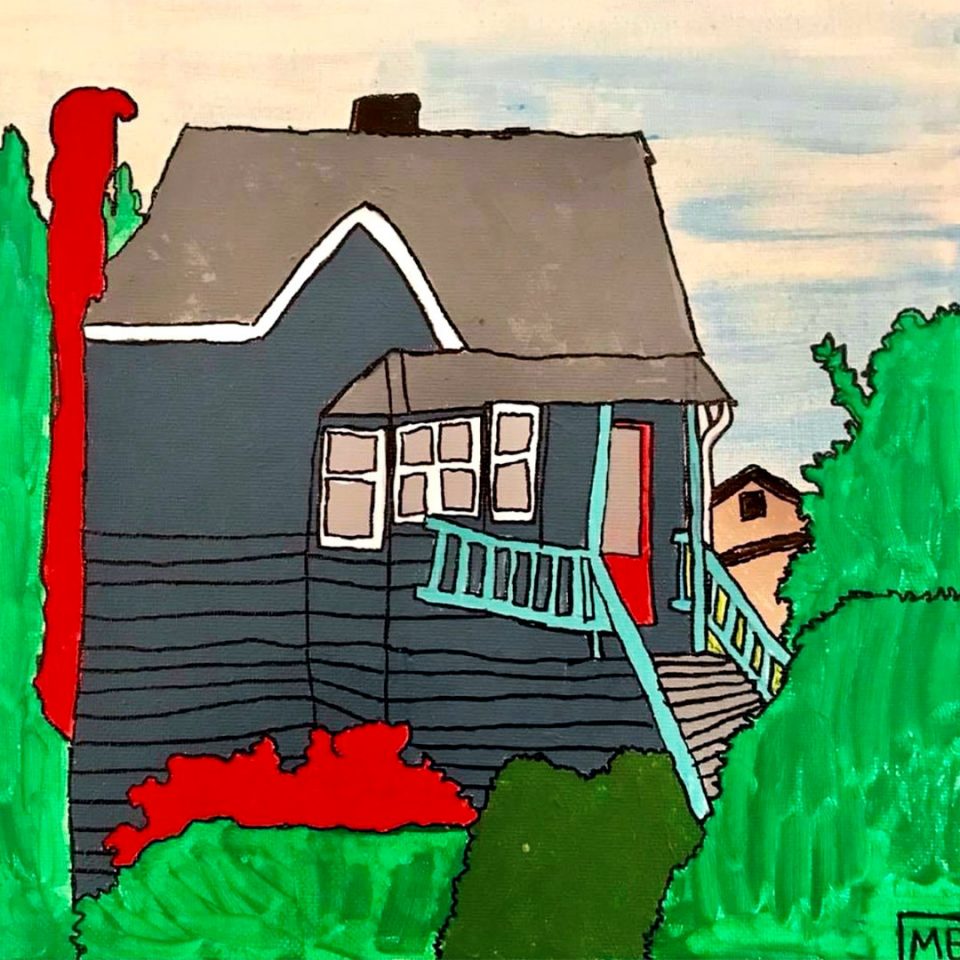 In the beginning of 2018, Mitchell was asked to do his first commissioned painting of someone’s home. By this time, Mitchell had been using the Terrace Art Gallery as his studio for a few years. People had gotten used to seeing him drawing and painting at the gallery a few times a week. Visitors saw Mitchell working on paintings of homes and started to commission their own.

In August 2018, Mitchell entered a painting in the Skeena Salmon Art Show and an image of his painting was put on the cover of the Exhibition Catalogue. In the fall of this year, Mitchell was paid to do caricature drawings at an event in town. 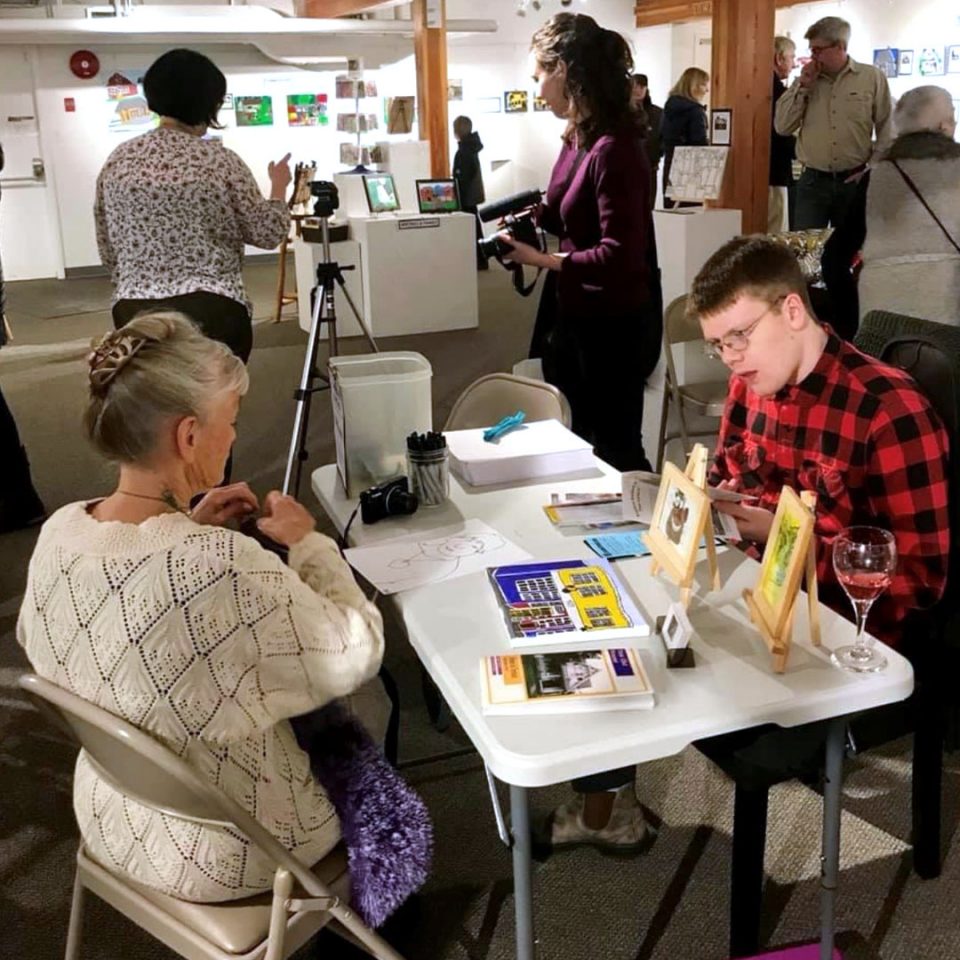 In January 2019, Mitchell had a larger exhibition at the Terrace Art Gallery. This show was called “Northern Homes Etc.” It featured paintings of homes, buildings, and businesses from Terrace, Stewart, Prince Rupert, and Shames Mountain. The ‘Etc’ part was a wall of paintings of flowers, horses, cats, birds, and other subjects Mitchell had painted. We also had a wall that showed a history of Mitchell’s artwork from elementary school through the present day. Mitchell was featured on our local tv station. I answered questions while Mitchell painted in the background. He also made the front page of the newspaper. This has all made Mitchell quite well known in the local art community and in town. I’m often asked if that is Mitchell the Artist and are you Mitchell’s mom? Steady commissions have been requested ever since this art show.

In the Spring of 2019, one of Mitchell’s paintings was selected to be made into a banner to hang on Greig Avenue in Terrace. His banner, along with 9 other artist’s banners hung there for a year. In the summer of this year, Mitchell was paid an honorarium to paint a large banner to advertise the Skeena Salmon Art Show. 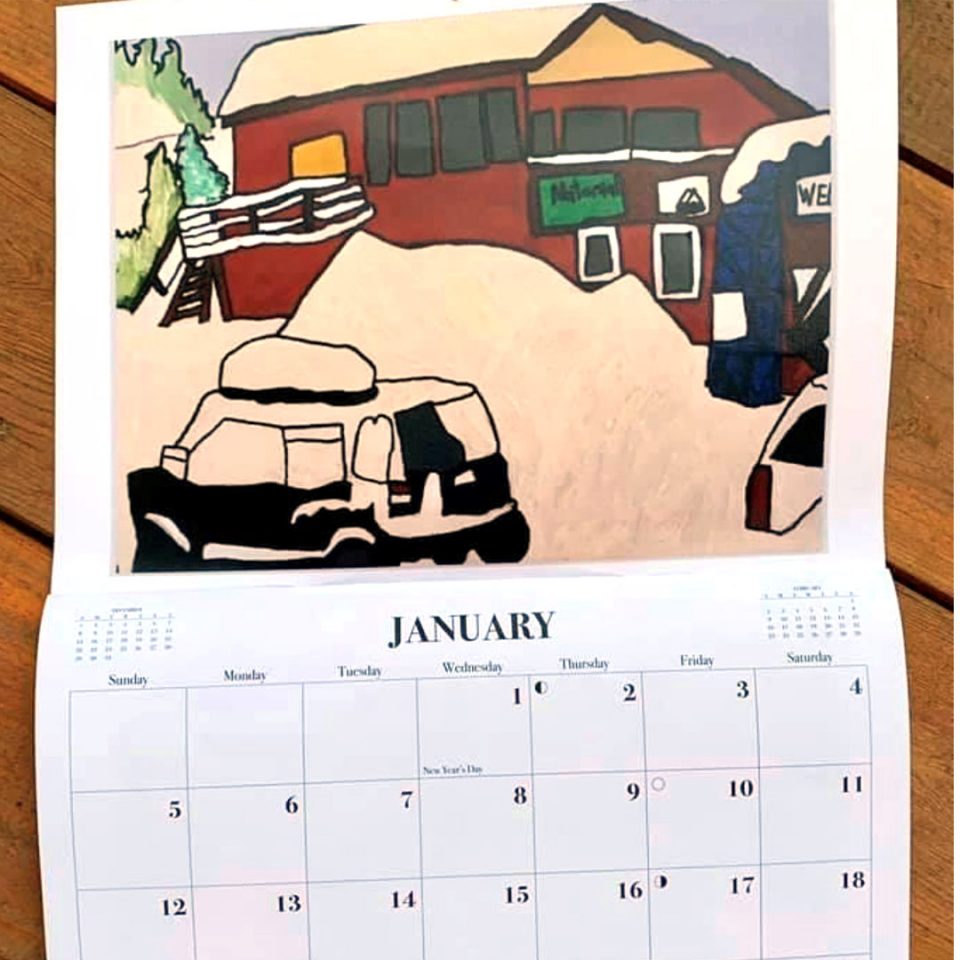 In the fall of 2019, we decided to make a calendar of Mitchell’s art to give to his family and friends as Christmas gifts. When we posted pictures of the calendar on his social media account in January, numerous people commented that they would like to buy an Art by Mitchell calendar. Since that first calendar, we have been making one each fall and selling them by pre-order only. Mitchell continues to give them as gifts, as well.

In the Spring of 2020, there was a full page in the Visit Terrace 2020 Visitor Guide featuring 4 of Mitchell’s Terrace Heritage building paintings. He also has art cards of these buildings. In 2021, Mitchell was once again featured in this guide with a full page spread including 6 of his paintings. In the summer of 2020, Mitchell was chosen as 1 of 4 artists to have an image of their artwork put on coffee bags to be sold as a fundraiser for the Skeena Salmon Art Show. Everyone on Mitchell’s list got a bag of that coffee for Christmas that year.

In February 2021, Mitchell was commissioned to do a painting of the storefront of Misty River Books. Since that painting was done, numerous businesses in Terrace have requested a painting of their building. Mitchell has done so many paintings, that last year’s calendar was of all the Terrace businesses he has painted. So far, 4 different businesses have used his painting as their Facebook page header.
In May and June of 2021, Mitchell’s paintings were hung on the Exhibition Wall at the Ice House Gallery in Prince Rupert. His artwork was so popular that he kept needing to paint more and more to fill the space as the paintings sold. He also received a number of commissions for Rupert buildings. Mitchell was offered a permanent space in the Ice House Gallery and his paintings continue to be very popular. We need to take new artwork out there once a month, which makes Mitchell very happy because he enjoys going to Prince Rupert to go to all the different restaurants in town especially Dolly’s for gluten-free fish and chips. 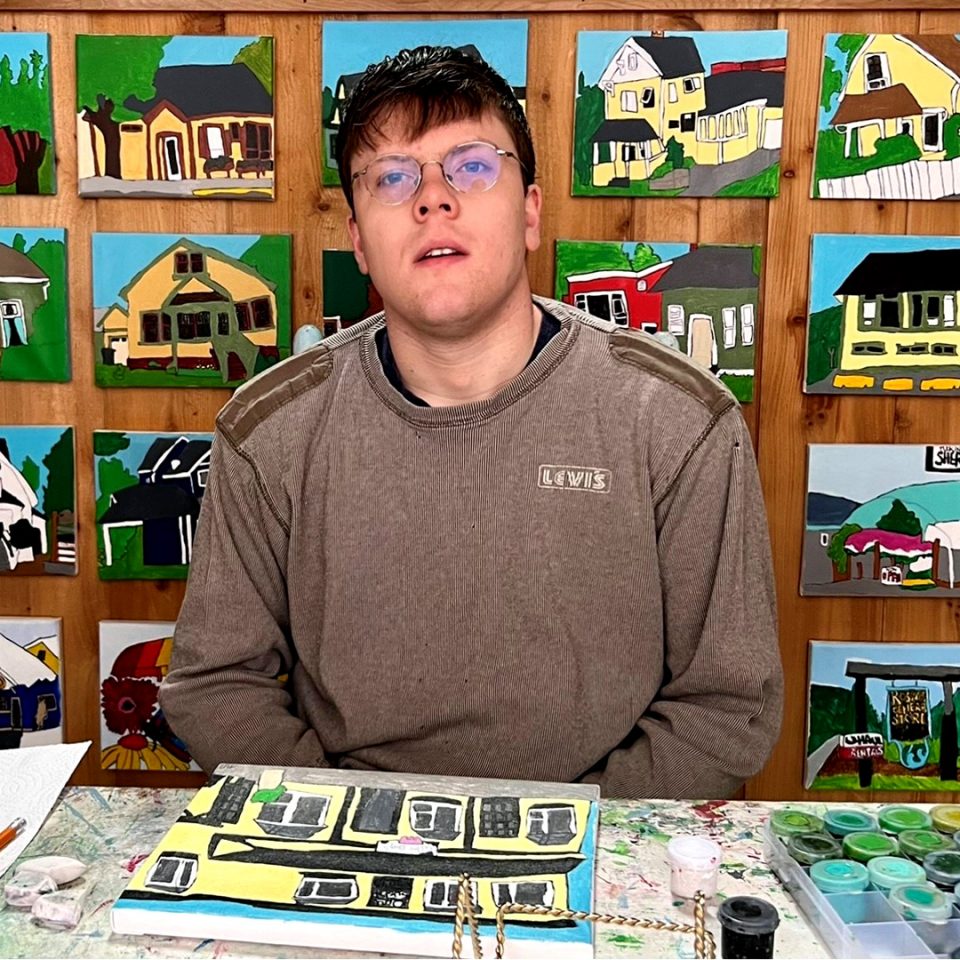 In the beginning 2022, we were contacted by two different people who found Mitchell’s artwork through his Instagram page. In March, he was featured on an account based out of Chile, @arteautista, that showcases the art made by people on the autism spectrum. On April 21st, which is Autism Awareness Day, Mitchell was selected as one of 21 artists with autism to be a part of the Madison House Autism Foundation’s ‘Autism After 21’ visual art show.

Mitchell’s artwork can now be found in art galleries and gift shops in Terrace, Stewart, Smithers, 100 Mile House, and Prince Rupert. We continue to be so proud of all that Mitchell has accomplished. 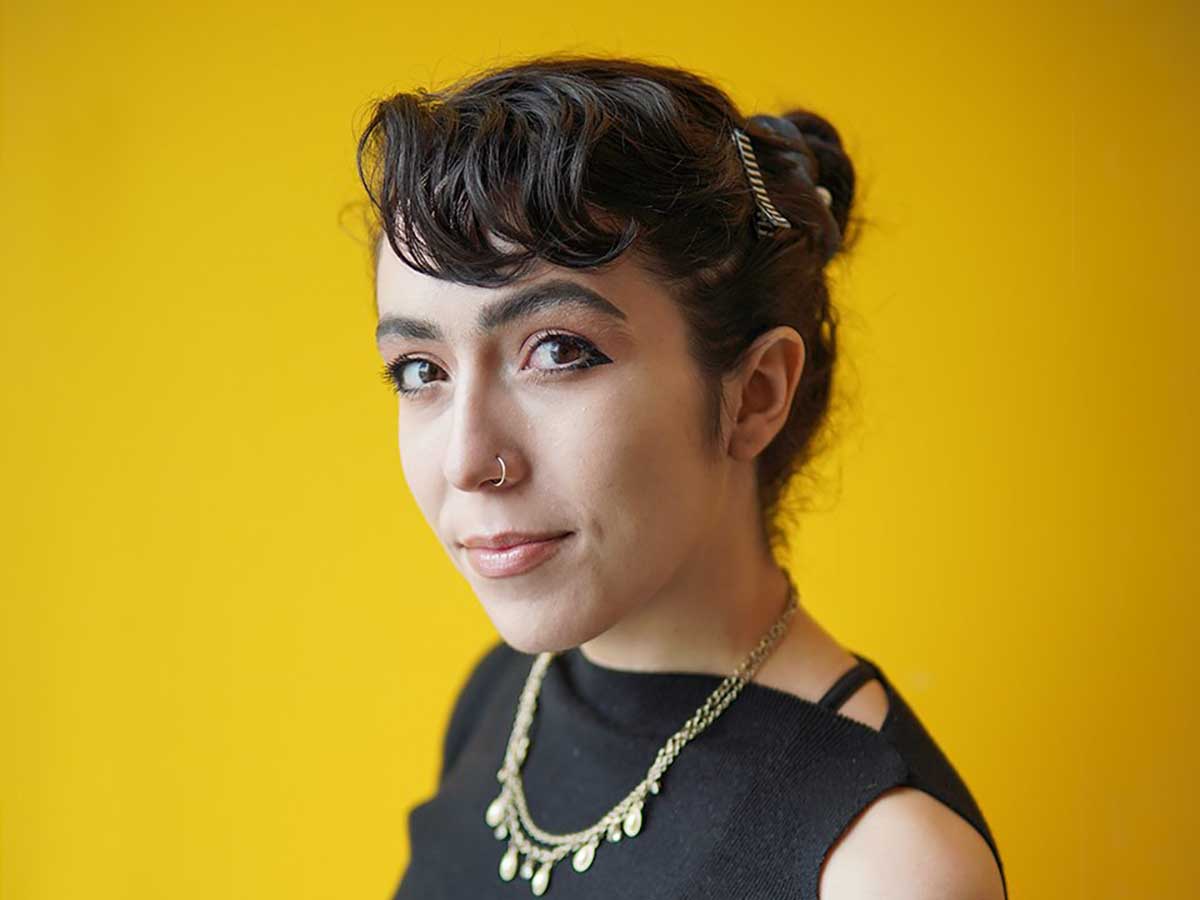 Aly Laube is an AutismBC content collaborator and a late-diagnosed autistic person. In this blog, they share their experience “coming out” as autistic. 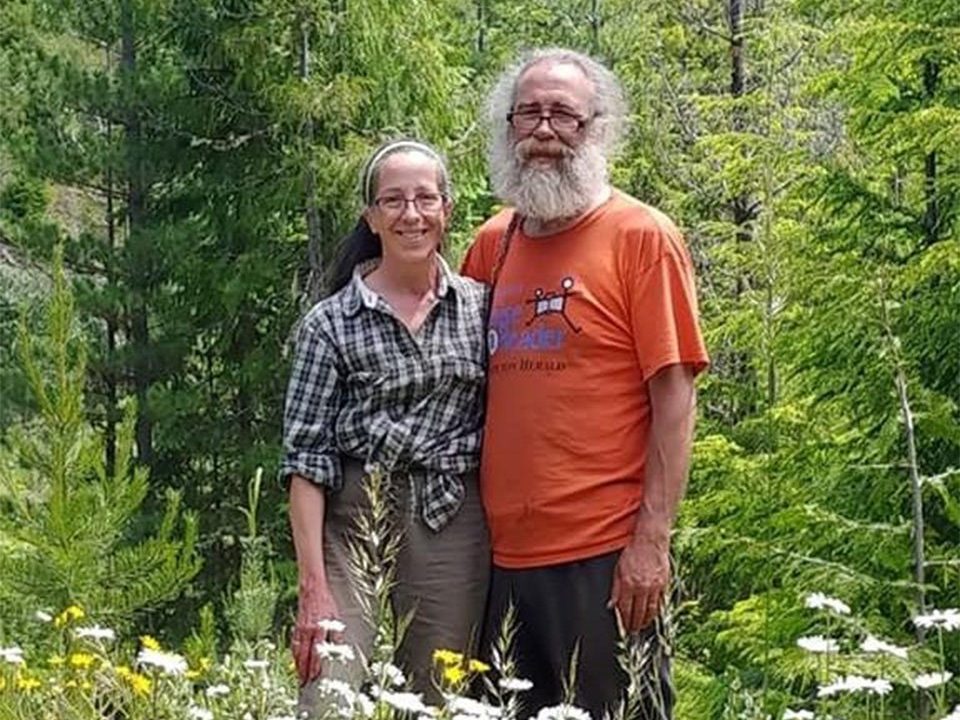 Rhoda is a late-diagnosed autistic woman who has had many challenges in accessing support and understanding. She shares with us what it’s like to be an older adult on the spectrum. Content warning: Use of functioning labels. 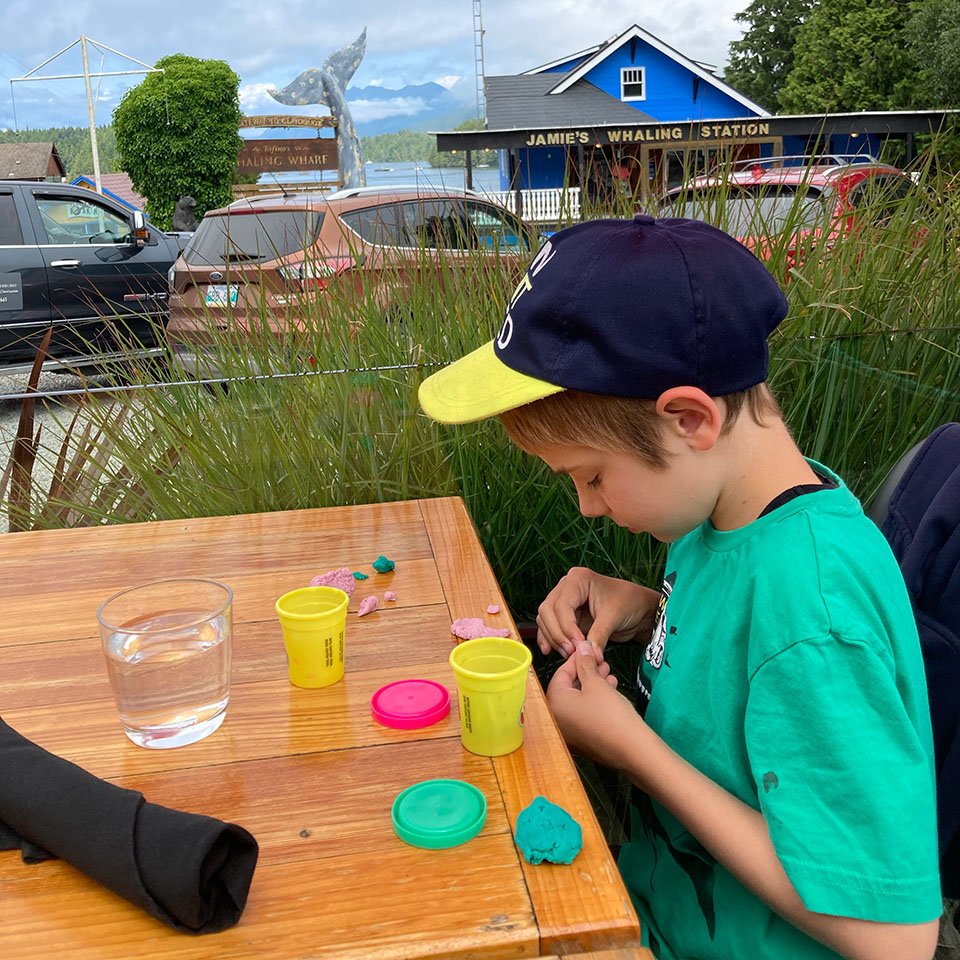 Eleven-year-old Petr recently immigrated to Canada from Czech Republic with his family. Petr is non-speaking and uses an iPad to communicate. In this blog, (with the help of his mom, Eliška) he shares all about his new life in Canada and his fantastic Play-Doh art!