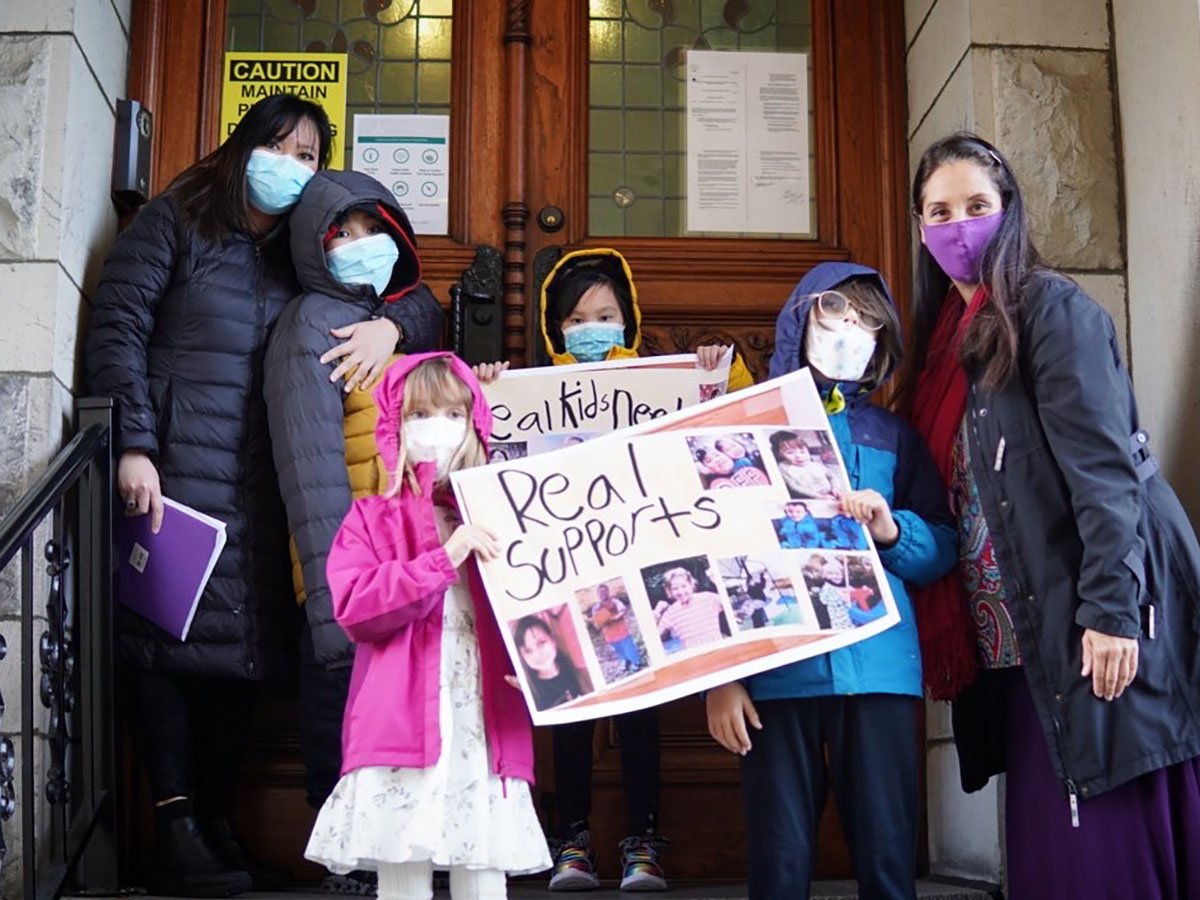 AutismBC Visits the Legislature: Advocating for Meaningful Consultation with the Disability Community

On November 17, 2021, AutismBC made a trip to Victoria – situated on the traditional territories of the Lekwungen Peoples – to speak with the Minister of Children and Family Development (MCFD), Mitzi Dean, and the Minister of Education, Jennifer Whiteside to request meaningful consultation with our community.

We visited Legislature with the intention of representing and voicing common concerns from disability organizations and community members about the proposed changes to the Child and Youth with Support Needs (CYSN) Framework announced by MCFD on October 27. AutismBC spoke at the legislature on behalf of a quickly growing and collaborative group that includes not only autism organizations, but disability organizations from across the province of BC.

We visited parliament to represent these organizations and the 30,000 families they serve. Initially, this visit signified 8 partnerships that have developed between AutismBC and other organizations since the announcement. Within 3 weeks, that number grew to include 24 organizations; since our visit to the legislature, this collaboration has now expanded to represent over 40 organizations and businesses. At the time, this was a collaboration that had grown from 8 to 24 organizations in three weeks. That number has since expanded to over 40. With this collaboration, we aim to build unity and move forward together as a cross-disability sector movement, advocating for much-needed change and requesting meaningful consultation over the proposed Hub model of service delivery.

The Journey to the Legislature

It was an early start to the day for our Vancouver team (getting up at 4:30am and catching the 7 o’clock ferry), but we wanted to make sure we arrived with plenty of time to prepare for our meeting with the Ministers. Six representatives from AutismBC made the trip: President of AutismBC’s Board of Directors, Kaye Banez; Executive Director, Julia Boyle; Program Manager, Brock Sheppard; Vancouver Island Regional Coordinator, Amanda Flentjar (who met us in Victoria); Marketing Manager, Selina Lim; and Marketing Coordinator, Terri Hopkinson. Also with us were Kaye’s husband, Vince, their two children, Lazarus and Estella. Community members Vanessa and Ryan Taylor and their two children also joined in for the day’s advocacy work.

After some group photos on the steps of the legislature, we went through security and on to our first meeting of the day. 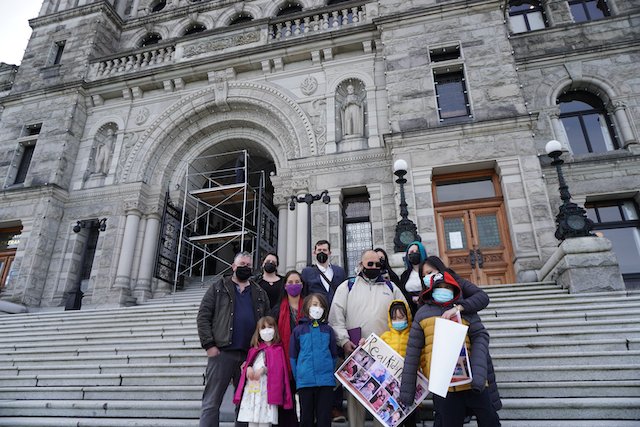 The announcement of the sweeping changes to the CYSN Framework has caused concerns for families and organizations across the province. It was with the disability community in mind that we sought an in-person meeting with Minister Mitzi Dean.

In this meeting, we addressed the limited pool of practicing service providers in BC. We talked about how proposed Family Connection Hubs (FCHs) are vulnerable to increased waitlists and additional costs to the province and to families. We urged the Minister to provide clear information on how the new Hub model will address the gaps in service provision across the province. Minister Dean and her team told us that their modeling shows there are enough service providers to operate the new system “if efficiencies were created.” However, that statement is very different from our lived experience and the concerns we are hearing and receiving from the disability community.

We also raised concerns about how a similar system is operating in Ontario. So far, only 600 children have been taken into that province’s needs-based system – compared to the projected 8,000. There are 50,000 children currently on waitlists to receive supports. BC needs to avoid replicating the same issues through its own service delivery. Additionally, we talked about how the Minister’s talking points are minimizing the role of diagnosis in the journeys of neurodivergent children with support needs.

Families have had traumatic experiences with hub-based models in BC and across the country. Minister Dean did not acknowledge that traumas MCFD has caused.

We’re calling on Minister Dean to provide transparent information and clarify how the FCH model will be an improvement to the current CYSN Framework. The announcement of the proposed changes has caused anxiety and stress within the disability community. Through this meeting at the legislature, we hoped to get clear and detailed answers to our questions to help calm some of the concerns reverberating throughout the community.

We hope that Minister Dean will take our talking points seriously and acknowledge that there is work and necessary collaboration to be done before the Hub model can be implemented. We invite the Minister to engage the disability community and our collaborative group of disability organizations in meaningful consultation going forward. 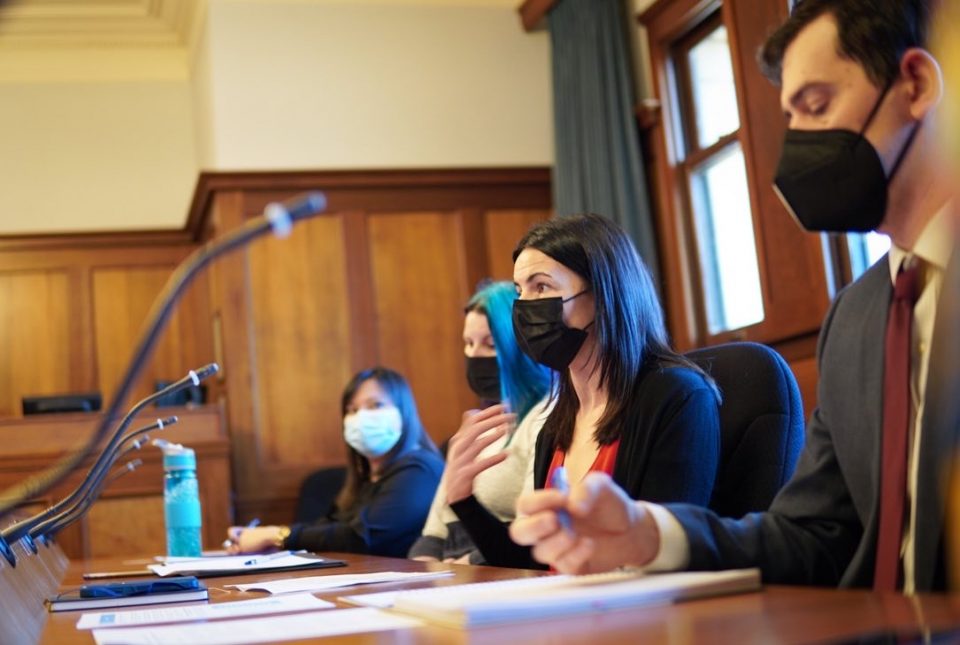 Speaking with The Opposition 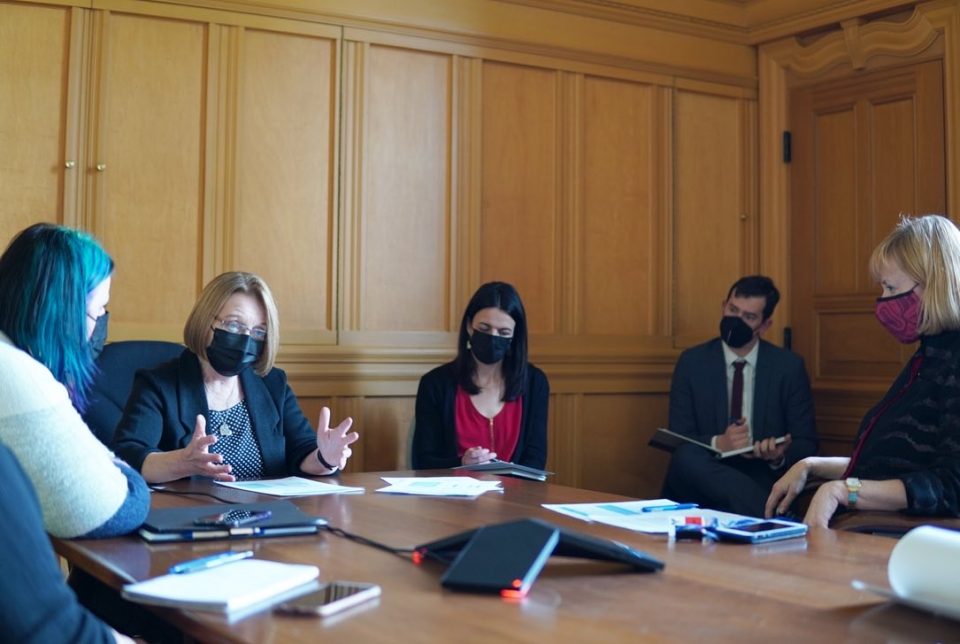 We were then invited to the gallery to view the Oral Question Period of the Legislative Assembly. Liberal Opposition Leader Shirley Bond opened the period by quoting our guest advocate for the day, Vanessa Taylor:

“I have been listening intently to the Minister committing to provide the proverbial ‘magic bullet’ while at the same time pointedly singling out every single autistic child, including my own two. The Minister would be mistaken to think that I am not offended to hear her repeatedly use false justifications to take my individualized funding away.”

After the Oral Question Period, we spoke with Jennifer Whiteside, the Minister of Education, about the changes coming to the school system. In particular, we wanted to know if she would honour her commitment to slow the roll-out of changes to distance and online learning to ensure they are inclusive and equitable.

The Government of BC describes inclusive education as “the principle that all students are entitled to equitable access to learning, achievement and the pursuit of excellence in all aspects of their educational programs. The practice of inclusion is not necessarily synonymous with full integration in regular classrooms, and goes beyond placement to include meaningful participation and the promotion of interaction with others.”

There needs to be choice for individual families. People need to be empowered to make informed decisions for what’s best for themselves and their children and youth with support needs.

We thank the Minister for her time and consideration of community feedback. 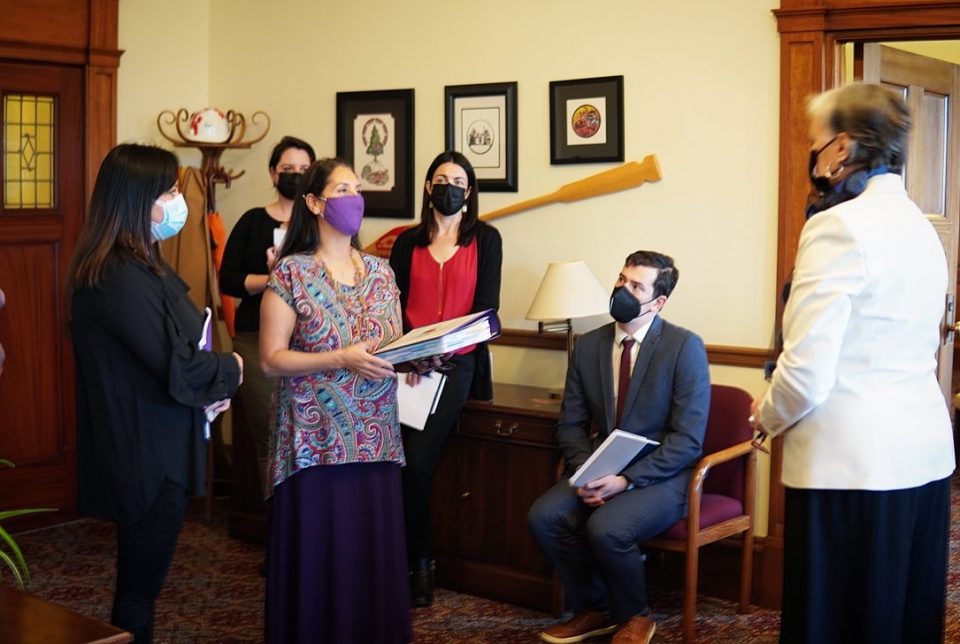 Our last task of the day was escorting our families as they delivered a large collection of community feedback and letters to the offices of BC Premier John Horgan. The Premier was not in the legislative offices during our visit, but we were privileged to hand-deliver testimonials from our community on what the individualized funding for autism supports has meant to them and the fear they now feel about these changes to … (who did you give the letters to?)

Along with these letters, the kids in our advocacy group that day created posters for Premier Horgan with photos of self-identified disabled children from across the province. These posters featured the poignant slogan, “Real Kids Need Real Supports.” 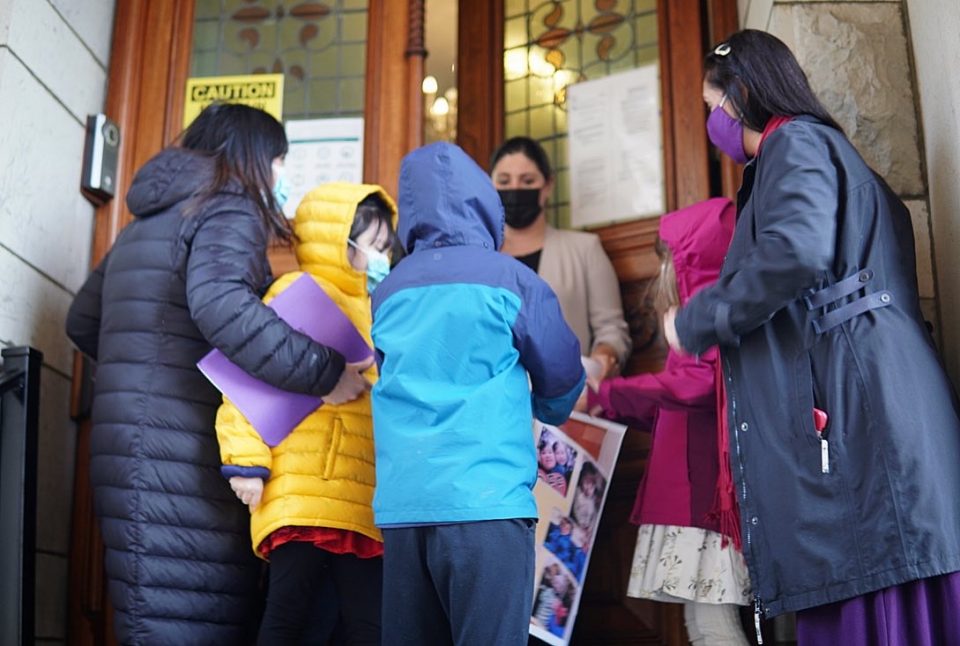 We will continue to communicate with our MLAs and encourage our community members to do the same. The government needs to hear from their constituents and learn from the lived experiences of BC families of children and youth with support needs.

Through all these changes and uncertainty, the staff at AutismBC, remain optimistic. We’re here to share and amplify your voices to increase the chances that the Minister will hear them and engage in meaningful consultation. As always, AutismBC is here to empower, support, and connect the autism community. Below, please see some other ways to express your thoughts on the new funding model. 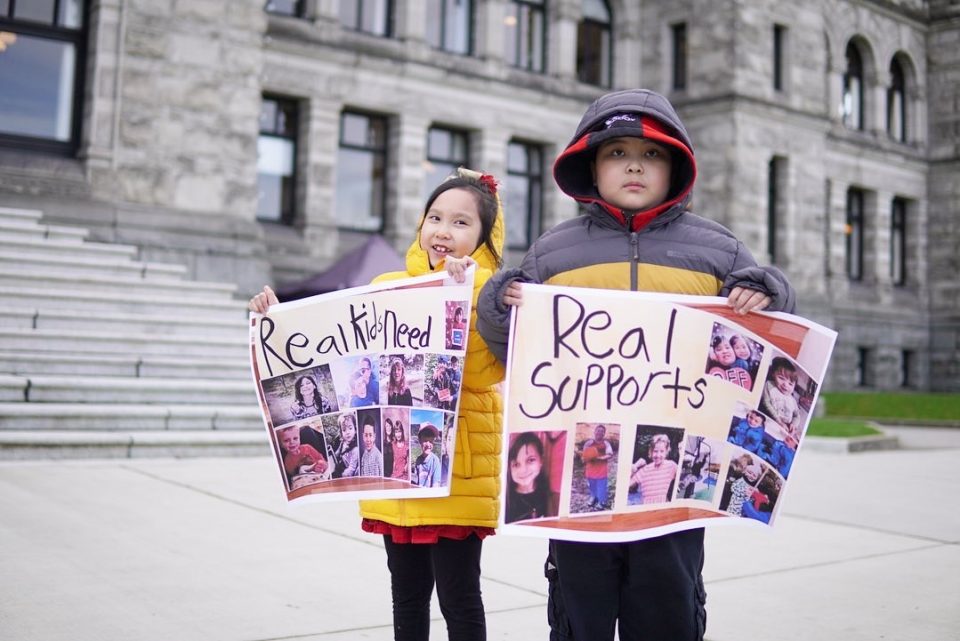 MCFD’s Autism Funding Changes and Family Hubs: What you need to know and what you can do