Aly Laube is an AutismBC content collaborator and a late-diagnosed autistic person. In this blog, they share their experience "coming out" as autistic.

As a 24-year-old former journalist, I’m still in the process of coming out as autistic.

It’s been a really long, confusing road to get here, but it has also been incredibly inspiring and empowering. Here’s why.

My whole life, I wondered why I felt like such an outsider. It didn’t matter where I was or who I was with — I always wanted to be alone at home, but when I would get there, all I could do was shut down, listen to music, and rest. Sometimes, for years at a time, it seemed like all I could do was sleep.

As a kid, I did everything I could to cope with the pain of misunderstanding and being misunderstood on what felt like a constant basis. It seemed like no one saw me, and anytime they did see the true me, they liked me a little less. Existing was overwhelming. Change felt debilitating. Hysteria resulted in negative repercussions.

As I went from my childhood to my adolescence, I fell into depression, developed several eating disorders, and believed that I had no value or place in my community or society. But because I still got good grades and had steady boyfriends, no one noticed. I was a wallflower, and I’ve never been more miserable.

Then, in university, I thrived academically while experiencing some of the darkest years of my life. Most of that time was spent on abusive relationships that left me wondering why, after all these years and no matter how hard I tried, I still couldn’t understand people.

Six years, four therapists, and too many traumatizing incidents later, I graduated with distinction and a degree in journalism — but still no idea why I couldn’t function without being unhappy. The pandemic happened right before I graduated, and since I’m immunocompromised, that meant seeing nearly nobody aside from my live-in boyfriend for almost a year.

During that time, I had a complete identity crisis, realized I was a polyamorous lesbian, tried and failed to make that work in my relationship, and got kicked out of my apartment suddenly — none of which was particularly pleasant. After that, I had to live with my brother, who is also neurodivergent, and realized I was autistic after dating other queer autistic people.

It wasn’t until I consulted with qualified professionals, did extensive research that’s still ongoing, and made more autistic friends that I even considered telling family. There are many people I still haven’t told, though I tend to wear my identities on my sleeve, because the consequences of ableism can be dire.

Understanding my autistic identity has been a rollercoaster (one I’m still riding), but I can confidently say that knowing who I am has made everything so much clearer and calmer in the long-run. Today, I feel more at peace than ever with who I am, and I have more faith that I can become the version of myself I want to be.

In hindsight, it really does make sense knowing I’m autistic.

But, like many little girls, I learned early on dramatic displays of emotion wouldn’t be tolerated by the people around me.

Since I feel everything so intensely, my natural inclination is to respond with equal intensity. That goes not only for negative emotions like frustration, fear, and sadness, but also for joy, adoration, and safety. I’m naturally noisy and fidgety and I don’t respond well to harsh sound, light, or touch. I tend to make “little noises” to express my mood more often than I use words to do so. The list could go on.

Regardless of the feeling or its intensity, young autistic people — and girls in particular — can’t express themselves freely without repercussions in neurotypical environments, so we learn to shove it down. Some of us get so used to doing this, we don’t even realize we aren’t being our true selves.

Authority figures reaffirm the importance of masking like this throughout our lives. I can still remember some of what they told me today: If you act like that, people will think you’re crazy. Or they’ll think I’m a bad role model. Or you won’t be able to succeed later in life. Or others won’t take you seriously when there’s something really wrong. Or you’ll be locked away and denied emotional support until you learn to behave.

Some of my earliest memories are of people around me frustratingly asking, “What’s wrong with you?” and “Why can’t you just calm down?” — and for a long time, I never knew how to answer them.

It gives me hope that if I were put into that situation now, I could at least begin to explain. Knowing I’m autistic was a start, and it had never been suggested to me until I started unmasking to other autistic people I knew I could trust.

Autistic people face so many veiled threats when it comes to unmasking, it makes sense that we mask to survive.

It doesn’t help that the healthcare system can’t be relied upon to take us seriously. Anyone who can be perceived as a woman probably knows how it feels to have their concerns dismissed by a doctor, and it’s a barrier I’m still struggling with to this day. As an autistic woman, I can never tell what’s more likely to work on a doctor: Masking and “seeming perfectly fine,” or unmasking and being misdiagnosed or written off as hysterical or hormonal.

The more intersections of oppression you exist on, the more dire the repercussions for unmasking. Black and Indigenous people, people of color, women, queer people, gender neutral and diverse and non-binary people, people with high access and support needs — all of them are more likely to face risk of bodily harm, unemployment, and housing precarity for refusing to play along with society’s many rules and expectations.

Understanding all of this, I’m still learning to unmask. My mask was so super-glued on that, for ages, I kept it up even when I was alone. If I caught myself acting in a way that seemed atypical, I would automatically discipline myself into suppressing it. It wasn’t healthy. It led to lots of meltdowns and burnouts, and being who I am, while never easy, feels much better.

The world is a harsh place to exist for many autistic people as is, and it gets harder when everyone keeps reminding you that your autistic traits are unacceptable. For me, this is how masking began. I learned that people treated me more nicely when I put up a front, hid my feelings, and mirrored their behavior to make them more comfortable. I was willing to pretend for the convenience of fitting in and getting what I wanted out of socializing: Opportunities and validation. At least that way, I reasoned, the only person suffering under the tyranny of my brain would be me.

I’ve since learned that being autistic is not a weakness, but a strength in many ways. Accommodating my needs makes me happier and more productive, which allows me to be a more positive influence in others’ lives too. To be frank — as I do so well, people tell me — I’m not sure how I would have made it this far without my outlets and support systems to guide me. Every time I pick up a guitar, I feel grateful my dad gave me his when I was 12 years old. I’m still in a band now, and music has been there for me when nothing else makes sense, which happens quite frequently, believe it or not. These outlets give me a way to focus on things that aren’t masking. Relief never felt so sweet.

Writing is a special interest that went from being a skill to a passion and then a skill again as I aged. Corporate journalism was unable to accommodate and support me, and I lost my zest for the craft while working within such a cutthroat industry. That drove me back to non-profit work, which I always dabbled in but never focused on, and where I can flex my empathy and written communication skills.

Now that I’m respecting my own needs and abilities, I’ve found non-profit spaces the best and safest environment so far.

Through my work with AutismBC, I hope I can pass down some of what I’ve learned and learn from all of you. 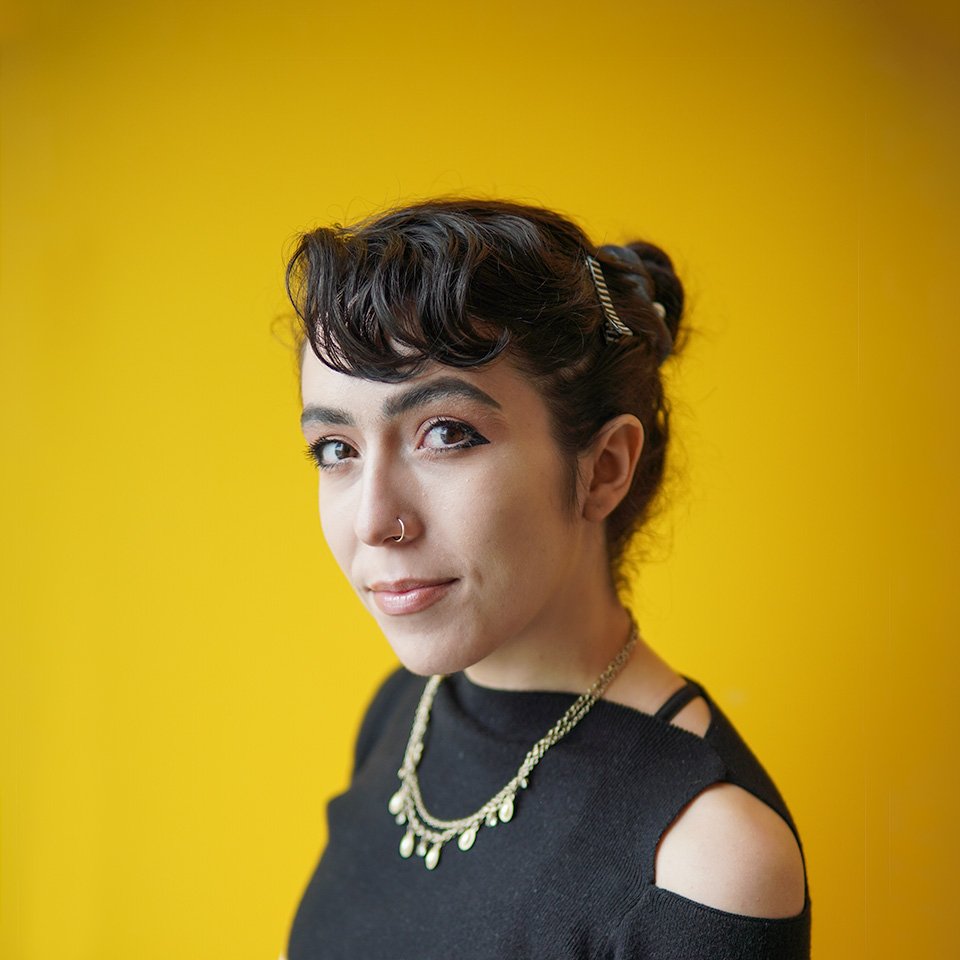 A lifetime of working in journalism and advocacy prepared me for becoming a content creator with AutismBC. As an autistic person with OCD, anxiety, depression, and myotonic dystrophy, I understand firsthand what it’s like to live and think differently than most, and I’m passionate about advocating for and communicating with others in the community.

I’m also a non-binary lesbian in a happy relationship. Outside of writing, I love to make music, watch horror movies, and hang out with my partner and cat. While your experience will be unique depending on where you land on the spectrum, and whether or not you have a diagnosis, many autistic students can benefit from sharing tips for post-secondary success. From Anxiety and ADHD to Autism I refer to myself interchangeably (I have autism / I am autistic); however, I prefer it when other people […] Do you prefer identity- or person-first language?  I prefer identity-first — autistic person. Can you explain your challenging journey to a female autism diagnosis? I […]